Hello! In short, I enjoy mathematics, music, computer science and some other stuff, which I apparently enjoy so much that I forgot what they are right now. Currently I work as a professor at the IMD institute of the Universidade Federal do Rio Grande do Norte, Brazil.

I obtained my PhD in theoretical computer science from ENS de Lyon (team Plume of the LIP lab) under the supervision of Olivier Laurent.

I obtained my MSc in mathematical logic from MPLA, and my BSc in pure mathematics from the University of Athens.

Further, boring information can be found in my CV (in English or em Português).

I'm re-reconstructing my website at the moment. This page is particularly outdated but I keep more specific parts of my website up to date; so… click around.

On the semantics of disjunctive logic programs
slides: [ Part I | Part II ]

Just in case the intersection of the set of OpenBSD users with the set of λProlog users is not a singleton (which is a conjecture yet to be proved, for the time being), you might find my notes on installing Teyjus on OpenBSD useful. My teyjus OpenBSD port is available there.

More information about the courses I am currently teaching or have taught in the past can be found on my teaching page.

I have been writing a book based on my lecture notes (in Portuguese).

You can also find videos of some of my lectures, seminars, etc., on my YouTube Channel (in Portuguese). 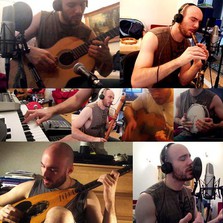 I like composing and some very few times performing music as well. Some pieces I have recorded lately are: Words, Relic, and Lunaby. Here's Relic:

And here are three of my favorite, much older compositions, I think:

You can find more information about my music on the.thanos.band.

I love programming! In case you care about that (though really, you shouldn't), I mostly use Haskell, TeX, and the Unix shell. You can find a few old and not-so-useful programs I've written below. For newer and not-so-not-so-useful programs, check my GitHub page. If you are looking for some other software in which I'm listed as the author, feel free to drop me an email.

Look busy doing nothing. Pretty much what it says... So, your eco-friendly (room)mate/mom/dad/whatever keeps powering off your computer, after glancing at the screen and making the wise decision that "it just sits there wasting energy, it's not doing anything". Look no further, this program is for you: lookbusy.

If you are interested in this, you may also want to check tapl-haskell, a similar, independent project.

If you have no idea what this book is all about, you probably couldn't care less about this program.

Due to some changes in recent versions of GHC, TsouTAPL won't compile anymore. Until I tweak I won't tweak those things that need tweaking (exercise for the reader), so let's pretend it's some kind of vintage attitude.